The Short SC.7 Skyvan, nicknamed the “Flying Shoebox” and “The Shed”, is a British-built general-purpose transport.

It features an odd, boxcar-like fuselage which FlightGlobal listed as “one of the twelve strangest-looking aircraft ever built”. Air Vice Marshal Ron Dick describes it in Air & Space Magazine as “Uncompromisingly chunky and angular, its freight container body hangs from wings which could have been shaped in a sawmill, and its twin fins were mere upright planks tacked on as if in afterthought.”

Despite this, the Skyvan did have its merits as a robust light transport aircraft. Originating from the Miles Aerovan and the failed Miles HDM-106 Caravan, it first took to the air in 1963, remaining in service to this day with militaries and civilian operators alike.

In 1958, Short (at the time Short Brothers & Harland Ltd) was approached by F.G. Miles Ltd., an offshoot of the bankrupt Miles Aircraft, looking for help to produce the H.D.M. 106 Caravan. The H.D.M. 106 was a development of the H.D.M. 105, a Hurel-Dubois extended-wing Miles Aerovan. Short, trying to diversify their line consisting of seaplanes, evaluated this offer, and refused it, finding it too advanced.

In June of 1959, Short formed a Light Aircraft Division. The first project of this newly formed department was a privately funded venture, a “general purpose transport with van-type loading”. Using data obtained from the failed Miles HDM.106 Caravan, they began the design of what is now known as the Short SC.7 Skyvan.

By August of 1960, Short had released further detail on the aircraft, and named it the “Skyvan”. Construction of the prototype began in 1960 at Queens Island, Belfast. Manufacturing was slow, as production was focused on the SC.5 Belfast heavy freighter. Initially, two aircraft were built, and the first made its maiden flight on January 17, 1963. As of the time of writing in September 2018, the Skyvan is still in service with many nations around the globe.

There are two extended versions of the Skyvan, the Short 330 and 360.

The Skyvan is a high-winged, twin-engine, fixed tricycle landing gear utility aircraft with twin rudders and a box-like fuselage. The box fuselage allows for a large rear door for loading and unloading freight. This also gives it a good efficiency, as it is capable of carrying over 1 ½ tons of payload. Although not a true STOL aircraft, it can take off from a half mile (804.67 m) field or strip. Simplicity and ruggedness are the primary features of the Short SC.7 Skyvan. It can be used for many purposes, including short-haul freight, passenger transport, skydiving, and much more.

With the prototypes being powered by 390 hp Continental piston engines and Turboméca Astazou 2 turboprops, and the initial production run being powered by the Turboméca Astazou XII turboprops, the Skyvan needed an upgrade. The Skyvan 3 was re-engined with Garrett AiResearch TPE331 in order to improve airfield performance in hot and high-altitude conditions. This was done as the previous engines were shown to be inadequate for Ansett-MALs New Guinea routes, as they only delivered 630 shp of the promised 690 shp. Ansett-MAL was a primary factor for this decision, being a key customer, but the upgrade also provided vastly improved engine handling for both the pilot and the aircraft mechanic.

Apart from the re-engining, various other improvements were made to the Skyvan. The increased power required larger trim tabs and a new out-of-trim compensator in the elevator. Larger fuel tanks for the increased fuel consumption (and the fact that installed consumption provided 5% better) resulted in an increased range. The increased weight of the engine resulted in a reappraisal of the airframe, a simplified design, and surprisingly, a lower empty weight. The cockpit layout was also cleaned up and a central warning system was added. All these upgrades were very well received by Short’s pilots, engineers, and customers alike.

The Skyvan has had a long history, serving around the world with various militaries. Of particular interest is the Skyvan’s service with the Prefectura Naval Argentina, the Argentine Coast Guard.

The Argentine Coast Guard operated 5 Skyvans out of Port Stanley and Pebble Island, where two were lost. The Coast Guard utilized their STOL capabilities for communication and light transport between the mainland and the occupied Falkland Islands.

A raid was mounted by SAS’s D Squadron to destroy the ground attack Pucaras planes based in the Falklands. On the night of the 10th, men of the Squadron’s Boat Troop were put ashore to provide reconnaissance. On Friday the 14th, HMS Hermes, her escort HMS Broadsword, and HMS Glamorgan separated from the carrier battle group, approaching Pebble Island by night. As Glamorgan approached to provide fire support, the 48 men of the SAS task force took off in Sea Kings. They landed, moving by foot to the airstrip, and by morning, all the aircraft there were disabled or destroyed with explosive charges. In the meantime, Glamorgan provided fire support, and the SAS withdrew. A brief Argentine counter-attack stopped when the officer in charge was shot and, with two men slightly wounded, the SAS escaped. The raid was successful, resulting in the loss of six Pucaras, four T-34C Mentors, and a single Coast Guard Skyvan (serial number PA-50), and halted the use of the airstrip. The remains of the Skyvan are still visible to this day.

The other destroyed Skyvan, PA-54, crashed in Stanley, Falkland Islands (then Puerto Argentino) on June 5th, from a failure of the nose landing gear during the landing at the racecourse of Puerto Argentino. Afterwards, sometime between the 12th and 13th of June, it was destroyed by 105mm British artillery fire and was written off. 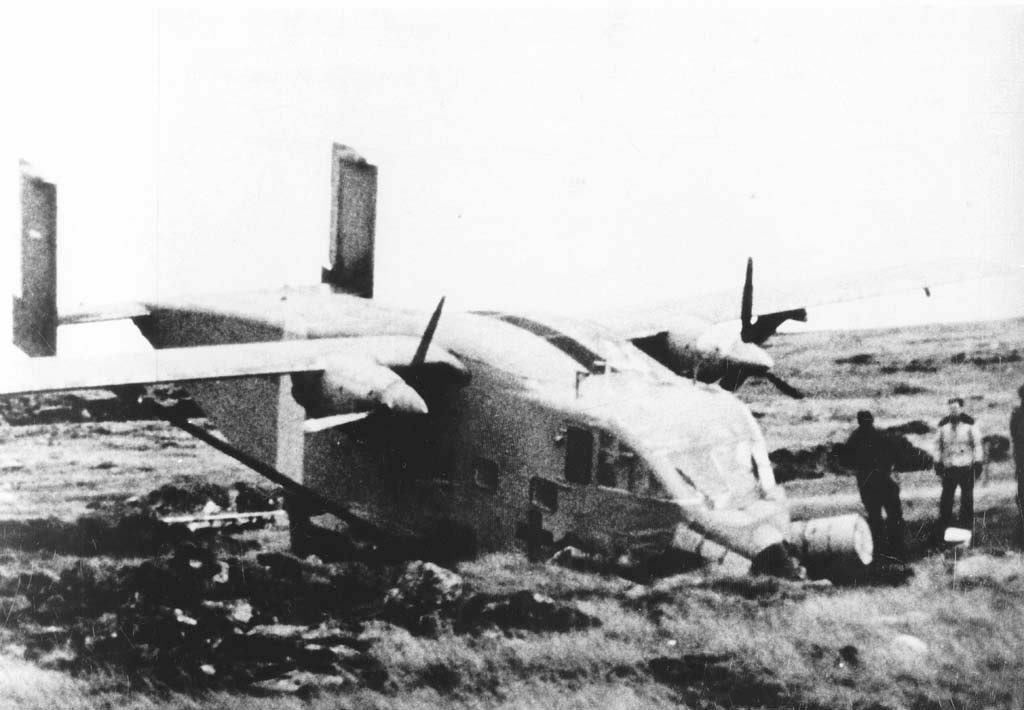 The Messerschmitt Me 209 (also known as the Bf 109R) was a racing plane designed by Willy Messerschmitt in 1938. The Me 209 would later establish a new world record which would not be beaten until 30 years later. Although commonly associated and confused with the Me 209 fighter plane designed in 1943, it holds no association at all other than the name. To this day, only the fuselage of Me 209V1 has survived and is now on display in a museum in Krakow.

Conceived in late 1937 by Willy Messerschmitt, the primary and sole focus of the Me 209 was speed. On August 1, 1938, the first test flight of the Me 209V1, piloted by Hermann Wooster, had lasted only 7 minutes due to engine and coolant problems.

Even though established practice dictated that if an aircraft had more than a dozen problems, it was to be abandoned, however Nazi officials were unwilling to give up on this promising aircraft due to the potential impact the aircraft could generate. Eventually, on April 26, 1939, piloted by Fritz Wendell, the Me 209 set the speed record it would hold for 30 years, though the He 100, the previous record holder, was suspected to have been able to break this record had it flown at a higher altitude but was prohibited from doing so by Nazi officials.

The designation Bf 109R was used for propaganda uses in order to cause confusion with the Luftwaffe’s primary fighter, the Bf 109, to maintain an image of invincibility which persisted until the Battle of Britain.

The Me 209 had a unique design, featuring a cockpit placed far back at the rear and a cross shaped tail section. A difference between the Me 109 and 209 was that it had a broad-track, inward-retracting undercarriage mounted in the wing section, instead of the fuselage. There was no tail wheel, instead using a spring loaded metal skid, which retracted into the lower part of the tail.

Because of the success of the racer, the Nazis attempted to arm it. The main factor that had inhibited adding weaponry was the fact that wings were almost entirely taken up the engine’s liquid cooling system, which was massive. The engine consumed 2 gallons (9 liters) of coolant water a minute. Holding 50 gallons (450 liters) of coolant, it had a flight time of approximately 35 minutes.

On August 1st of 1938, the Me 209V1 flew for the first time. Piloted by Hermann Wurster, the test flight lasted only 7 minutes. Unfortunately, Wurster found the plane very unsatisfactory. In a Messerschmitt AG document found post-war by the Allies, it was found that Wurster made several complaints about the Me 209.

The only remaining Me 209V1’s fuselage, formerly part of Hermann Göring’s personal collection, currently lies in the Polish Aviation Museum in Kraków, Poland. Germany has offered to purchase the Me 209 but has been unable to do so.