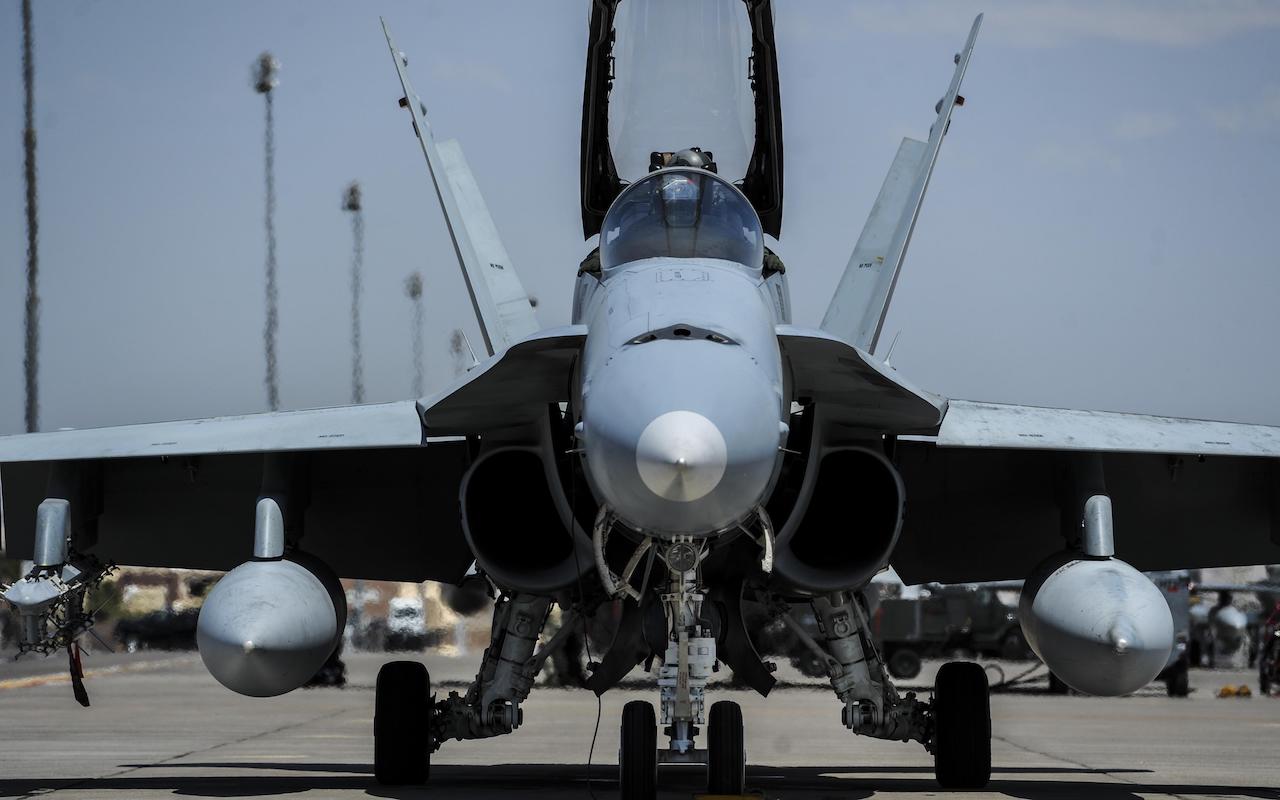 The first European customer for the F/A-18 Hornet multirole fighter was the Spanish Air Force, the Ejercito del Aire Espanol (EdA). Spain did not join NATO until May of 1982, but even before that date the Spanish government had issued a requirement for a new fighter/attack aircraft that would replace its fleet of F-4C Phantoms, F-5 Freedom Fighters, and Mirages. In response to the announced requirement, the US government initially offered Spain an interim loan of 42 ex-USAF F-4E Phantoms, followed by the sale of 72 F-16s. However, the F-18 entered the competition in 1980, offering the benefit of a twin-engine safety margin.

In December of 1982, Spain announced that they had selected the Hornet and made plans to order 72 single-seaters (F/A-18A) and 12 two-seat (F/A-18B) versions. However, this proved more than the Spanish government could afford, and the order was reduced to only 60 A variants and 12 B variants on May 31, 1983. An option was put aside for 12 additional Hornets, but due to budgetary restrictions, they were not taken up.

As part of an offset agreement reached with Spain, Construcciones Aeronauticas SA (CASA) at Gefale is responsible for the maintenance of the EdA Hornets. CASA is also responsible for major overhauls of Canadian Hornets based in Europe, as well as the Hornets of the US 6th Fleet in the Mediterranean.

The Spanish Hornets are sometimes referred to as EF-18A and EF-18B, the “E” standing for “España” (Spain) rather than for “Electronic” as would normally be the case for an official Department of Defense designation. They have local EdA designations C.15 and CE.15 respectively. Serial numbers are C.15-13 through C.15-72 and CE.15-01 through CE.15-12 respectively.

The first EdA Hornet, EF-18B CE.15-01, was presented in a formal ceremony at St Louis on November 22, 1985, and made its first flight on December 4. The first few two-seaters were sent to Whiteman AFB in Missouri, where McDonnell Douglas personnel assisted in the training of the first few Spanish instructors. The first two-seater was flown to Spain on July 10, 1986. By early 1987, all 12 two-seaters had been delivered to Spain, after which the single-seaters were delivered. A total of 60 EF-18As and 12 EF-18Bs were delivered to Spain, the last planes being delivered in July of 1990.

The Hornet serves with Escuadron (Squadron) 151 and Escuadron 152 of Ala de Caza (Fighter Wing) 15 at Zaragoza-Valenzuela and with Escuadron 121 and Escuadron 122 of Ala de Caza 12 at Torrejon de Ardoz. Escuadron 151 was established first and declared combat-ready in September of 1988. In EdA service, the Hornet operates as an all-weather interceptor sixty percent of the time and as a night and day fighter-bomber for the remainder. In case of war, each of the four front-line squadrons is assigned a primary role. 121 is tasked with tactical air support for maritime operations, 151 and 122 are assigned the all-weather interception role, and 152 is assigned the suppression of enemy air defenses (SEAD) mission.

In 1993, plans were announced for the EdA’s fleet of EF-18A/B Hornets to be upgraded to F/A-18C/D standards. McDonnell Douglas reworked 46 of these planes, with the remainder being upgraded by CASA. Most of the changes involved computer improvements and new software, although some changes were required to the weapons delivery pylons. Following the rework, the planes were redesignated EF-18A+ and EF-18B+.

Worried about a “fighter gap” opening up early in the next century because of delays in the Eurofighter 2000 program, Spain searched for additional fighter aircraft, acquiring some additional Mirage F1s from Qatar and France. The USAF offered Spain 50 surplus F-16A/B Fighting Falcons and the US Navy offered about 30 F/A-18As. These F/A-18s had the advantage in the contest, since Spain already operated the Hornet, and in late 1995 the Spanish government approved the purchase of 24 US Navy surplus F/A-18A/Bs. This marked the first sale of US Navy surplus Hornets. There was a separate deal for new F404-GE-400 engines, which were being contracted directly from General Electric.

With the withdrawal of USAFE and Canadian squadrons from Europe, Spanish F-18s (and Mirage F1s) have been in demand for NATO exercises and are frequent visitors to air bases in Europe and the UK. In 1994, eight EF-18s participated in a Red Flag exercise at Nellis AFB in Nevada. Eight EF-18s participated in Deny Flight operations out of Aviano, Italy beginning in December of 1994. On May 25, they received their first taste of combat when they participated in an attack against a Serb ammunition depot near Pale (currently in Bosnia and Herzegovina).

The Hornet is extremely popular with its EdA crews and is reportedly a pure joy to fly, stable and yet highly maneuverable and with good acceleration. By 2002, only six Spanish Hornets had been lost in accidents. This is the best safety record of any EdA fighter that ever served, and as good, if not better, than that of any other F/A-18 operator.

After the Bosnian War began in 1992, the UN Security Council passed a resolution prohibiting military flights in Bosnian Airspace. Despite this no-fly order, hundreds of violations were committed. As a result, enforcement of the UN no-fly zone over Bosnia and Herzegovina by NATO began in 1993 as Operation Deny Flight, which was successful in denying unauthorized airplane access over Bosnia, but was ineffective with regards to helicopters. However, Operation Deny Flight was extended beyond the enforcement of the no-fly-zone, with ground air strikes in support of UN forces being made in the operation. As a NATO member state, the Spanish Air Force was involved and flew missions jointly with the U.S. Air Force, with eight EF-18s, two KC-130s and one CASA 212 participating in 23,000 fighter sorties, 27,000 close air support missions, 21,000 training sorties and 29,000 SEAD and other types of sorties.

The next military operation of the Spanish Forces was Operation Deliberate Force, aimed at weakening the military power of the Bosnian Serb Army which had perpetrated the Srebrenica massacre in July 1995, in which 8300 Bosnians were murdered. The air campaign lasted for three weeks, with eight EF-18s and several other Spanish aircraft involved in operations flying over 3500 sorties.

Spanish Air Force EF-18 Hornets have also flown Ground Attack, SEAD, and combat air patrol (CAP) combat missions in Kosovo, under NATO command, in the Aviano detachment (Italy). They shared the base with Canadian and USMC F/A-18s. Over Yugoslavia, eight EF-18s, based at Aviano AB, participated in bombing raids in Operation Allied Force in 1999, a NATO military campaign directed against the Federal Republic of Yugoslavia as part of the Kosovo War. The operation was carried out without UN approval due to China and Russia vetoing it. The end of the campaign lead to the withdrawal of Yugoslav forces from Kosovo and end to the Kosovo War.

During the 2011 Libyan Civil War, a coalition of nations imposed a no-fly zone over the country in order to prevent Muammar Ghadaffi’s Lybian Armed Forces from using the air force to bomb the rebels, along with an arms embargo. Six Spanish Hornets, along with a few other Spanish planes, participated in enforcing the no-fly zone. Spain also allowed the use of its Rota, Morón and Torrejón bases by the coalition. The total costs for Spain over the 7-month operation ammounted to more than 50 million euros.