Inspired by the Kyushu J7W and Curtiss-Wright XP-55, the P-later-F-74’s radical wing designs lifted its position in aviation history to the jet age’s dawn. With a canard layout and its inverted, swept-back gull wings, this little-known fighter-bomber was a broad new attempt at close air support by Republic Aviation. Meet the unnamed member of the “Thunder family” – F-74 Thundercloud.

After Japan’s surrender in 1945, the U.S. Naval Technical Mission to Japan immediately commenced. Found at an abandoned hangar of the Itazuke Air Base, an aircraft with a radical design caught everybody’s eyes. This is the Kyushu J7W Shinden, an interceptor with a canard layout and a pusher engine at the back, similar to the U.S. Army’s XP-55 Ascender. Along with other interesting Japanese designs, the J7W was dismantled, crated, and shipped to the U.S.

Immediately after the Second World War, USAAF launched their next generation multirole strike fighter program. The winning project of the contract would be awarded the codename P-74. However, most major companies such as North American and Lockheed were busy creating their first jets, leaving Republic Aviation the only participant. Impressed by the J7W’s perfect integration of nose-mounted weapons and the large but streamlined fuselage that houses powerful engines, Republic decided to give it a shot, as a then-intermediate candidate of the P-84 Thunderjet.

The F-74 was an all-metal, monocoque, low-wing cantilever monoplane. Its unique canard layout consisted of a pair of compound delta wings that integrated an inverted “gull wing” design with a pair of dihedral wing tips that houses the ailerons, and a pair of smaller, less swept back trapezoidal canards at the front of the aircraft, immediately behind and above the modular weapon bay. Two vertical stabilizers are positioned at the joint between the main wing and the wingtips, with anti-skid wheels on the bottom. A pair of long and narrow side intakes drew upcoming air into the rear-mounted, air-cooled radial engine (R-3350 or 4360) that drove a set of four wide paddle blade style constant speed propellers [1].

The nose-mounted weapon bay could be easily swapped at any frontline airfield to suit different combat scenarios, ranging from the basic “six-pack” .50 machine guns to a pair of powerful 37mm cannons. The powerful R-4360 engine also allowed an assortment of weapons to be carried under its wing pylons, ranging from unguided rockets, general purpose and napalm bombs, to machinegun pods that further enhance the aircraft’s firepower.

Not Your Average Cumulonimbus

Only one year after Republic “won” the contract by being the sole participant, on 17th August 1946, the XP-74-A-0-RE prototype flew for the first time. With a R-3350 engine and simulated counterweights instead of guns, the aircraft displayed favorable control characteristics. Its low-speed handling was surprisingly well for an aircraft this size, thanks to its large wing area and powerful pitching leverage provided by the front-placing canards. The only two complaints of the test pilot were its large torque on the takeoff roll and the fragile rear propeller he broke on landing. The first problem was addressed by applying more trim, with the second one solved by adding a pair of anti-skid wheels under the vertical stabilizers.

However, the Army paused the XP-74 project in favor of the jets. The project was also overshadowed inside Republic themselves, because their jet replacement of the P-47 Thunderbolt – the XP-84 Thunderjet – already took to the skies six months before XP-74 did. All testings were halted and the project group was dissolved, despite the emergence of another high-altitude interceptor variant, the XP-74B.

Luckily, the newly-formed USAF changed the fate of this plane one year later. Facing threats of probable “Communist-containing” wars (Korean War and subsequently Vietnam War), the Air Force needs a reliable attacker with a large payload as a suitable backup to the new and unreliable jets. The Thundercloud was revived under the name of F-74. Republic offered the USAF an improved version, dubbed as the F-74D. With a powerful R-4360 radial engine and four 20mm AN/M3 cannons, this machine could rain down deadly ordnances at an incredible efficiency [2]. Five D-variants fought during the Korean War, with one of them later modified for the Project GunVal, carrying four T-160 cannons as an experimental configuration. After the retirement of all F-74s, some were acquired by NACA and later NASA as X-74s for experimental airfoil research. 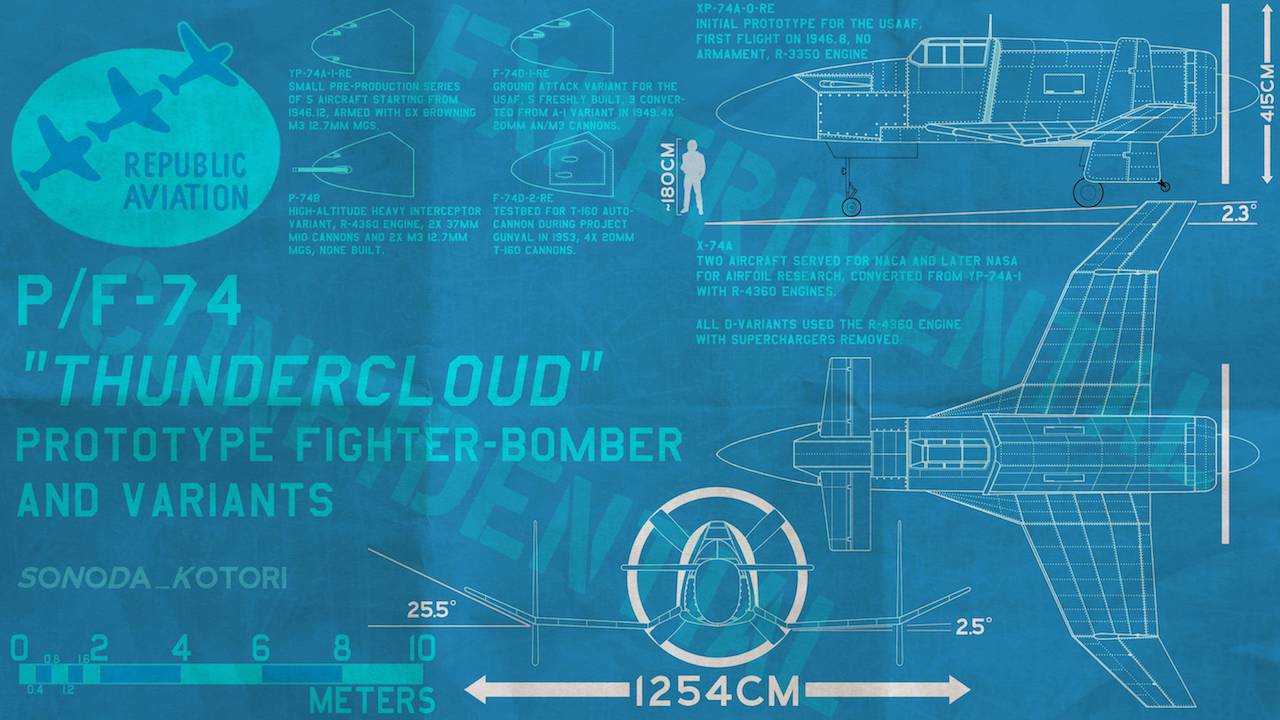 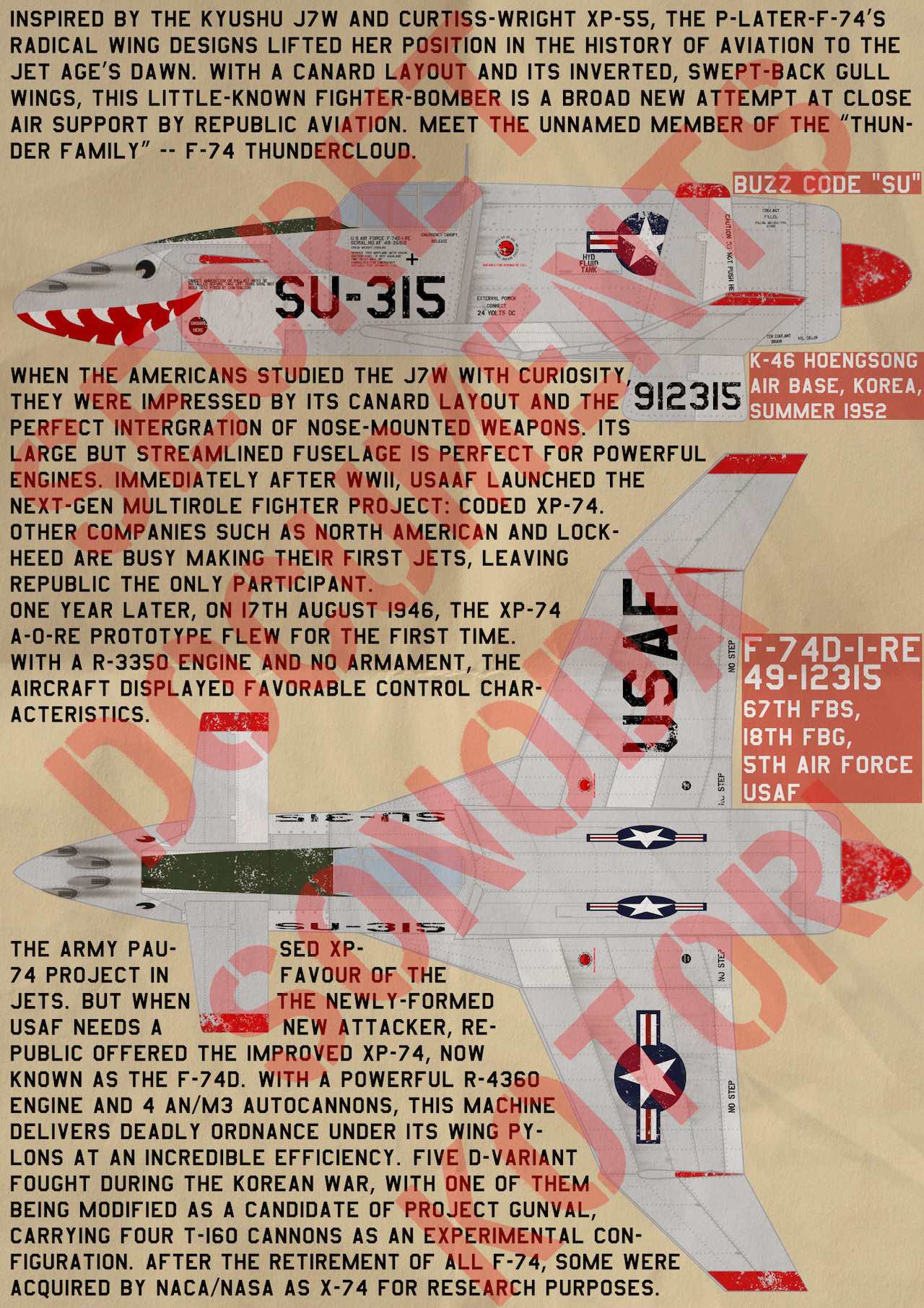