Sweden (1997)
Multirole Fighter Plane – 247 Built
A light single-engine multirole fighter, with a delta mid-wing and canard configuration. This aircraft has a fly-by-wire flight controls. Purposed with replacing the Saab 35 Draken and Saab J 37 Viggen AJ, SH, SF and JA versions in service with the Flygvapnet (the Swedish Air Force), and in service since 1995. Its development began in the late 70’s, with the aircraft intended to perform the same missions of the models it was replacing. As a result, the Gripen is capable of executing missions as fighter, attacker, and reconnaissance, being also a cheap yet well-powered and highly manoeuvrable jet, capable of integrating well with the Flygvapnet communication and infrastructure systems. It is also a platform with good upgrading capacities. Another special feature of this model is the short take-off and landing (STOL), alongside its agility and responsiveness at subsonic speeds, low induced drag and good supersonic performance. A product of Swedish innovation and defence needs, allowing Sweden to maintain its neutrality during the Cold War, the aircraft’s STOL characteristic came as a result of the policy of using highways and roads as airstrips, in order to reduce the potential damage to Flygvapnet air assets in case of attack, and to maintain air defence capacity. It was also intended to be an easy maintenance airplane, with conscripts having basic technical knowledge being able to do maintenance works. This increases the aircraft’s service life.

The Gripen is designed as a mid-delta wing fighter, with a single tail and a single Volvo Flygmotor RM 12 engine. It has canard winglets that also serve as complement for the two aerodynamic brakes located at the sides of the rear fuselage. The combination of the canards and the delta wing design allows the Gripen to fly at 70-80 degrees of attack angle, allowing also STOL capabilities (800 mts/2600 ft airstrip). Its purposed aerodynamic instability is compensated with a fly-by-wire technology that bestows the Gripen with considerable fly characteristics. The engine also plays its part in shaping the Gripen characteristics, along with some additional features. The double digital control and double ignition allows the pilot and the aircraft to be safe in case of emergency. The engine itself is reinforced to withstand the impact of birds or foreign objects. The radar – an Ericsson pulse-Doppler – allows the Gripen to have powerful and sharp ‘eyes’, as it allows multiple target track and beyond visual range (BVR) for air-to-air; mapping ground and surface target indication and tracking for air-to-ground; and sea surface search and tracking. 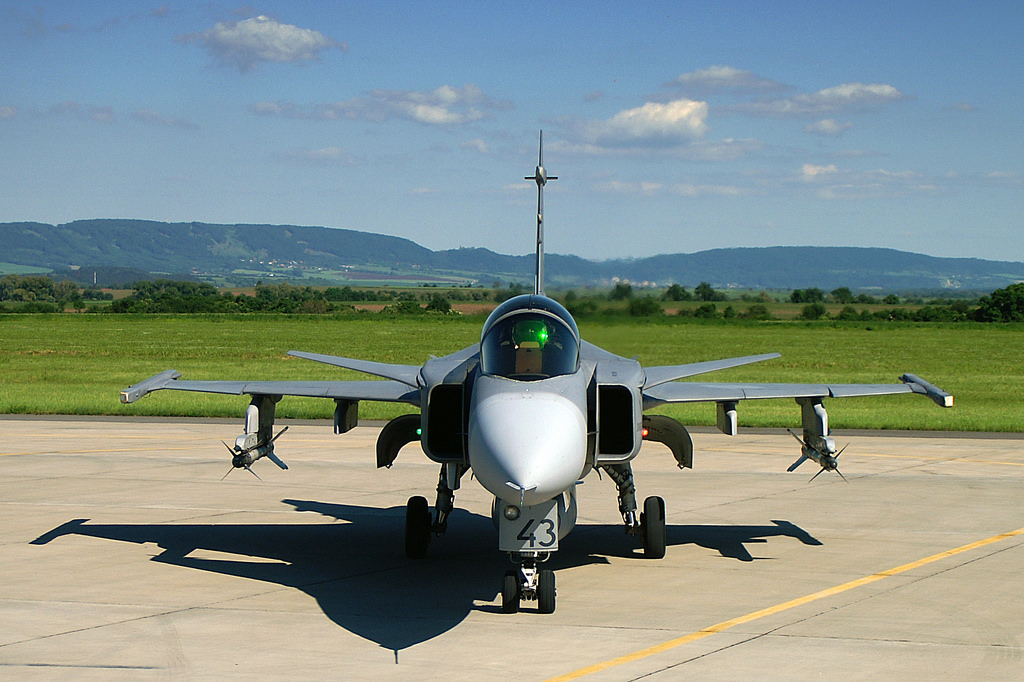 The JAS 39 has a Tactical Information Data Link System (TIDLS) digital network which provides the Gripen with a tactical advantage: to distribute and share radar and sensors information with up to 4 aircraft within a radio of 480 kms (300 miles), enabling tactical combat information and situation awareness. It also provides any pilot information about the position, speed, missile load, heading and fuel state of other Gripens. This provides also concealment to any pilot opening fire against a selected target, without revealing its position, while the launched missile – a medium-range air-to-air-missile (AMRAAM) – will be guided not only by the aircraft it was fired from, but also by the other aircraft, whose guidance can improve the missile’s accuracy. TIDLS technology however, is not a product enjoyed only by the Gripen’s development, but it is an enhanced version, as the JAS 35 Draken and JAS 37 Viggen had a similar and early datalink systems. As it is a multirole aircraft, this means it can change its mission while flying, as the pilot change the avionics and sensors in flight. Although the small size of the plane limits these capacities and payload, forcing missions to be considered before sorties, it also allows the aircraft to reduce detection by radar.

The Gripen goes to Battle The high adaptability and capacity of the aircraft to be easily upgraded allowed the Gripen to be modified in order to fit NATO standards, and to increase its export options. Alongside the British BAE, Saab improved and modified the Gripen so to be able to operate with NATO missiles, opening the open for the aircraft to carry more powerful missiles, and having also enhanced air-to-ground capabilities. Those modifications allowed the Gripen to support NATO intervention in Libya (Operation Unified Protector) with tactical air reconnaissance, enforcement of the no-fly zone, the arms embargo, and support for civilian protection. It was also able to receive updates and information from NATO E-3 AWACS airplanes. The Gripen performance was optimal during the operation, as it flew 570 missions, around 1770 flight hours, and delivered 2770 reports.

Given its characteristics and its good relation cost/operation, the Saab JAS 39 Gripen has received the attention of many countries that expressed their interest in the fighter. Countries like Argentina, Austria, Belgium, Botswana, Bulgaria, Colombia, Croatia, Ecuador, Estonia, Finland, India, Indonesia, Kenya, Latvia, Lithuania, Malaysia, Mexico, Namibia, Peru, The Philippines, Portugal, Serbia, Slovakia, Slovenia, Uruguay, and Vietnam, all could become potential operators of the Gripen.