The Mitsubishi G7M “Taizan” (泰山/Great Mountain) was a planned long range strategic bomber for Imperial Japan’s Army Air Service. Developed out of the need for a bomber capable of striking the continental United States, the Taizan would face a series of developmental problems, ultimately leading to the cancellation of the project.

Prior to the start of World War II, Japan had foreseen that in a potential future conflict with the United States, it would require a long range bomber capable of striking the US mainland. In order to fulfill this requirement, a review was conducted in 1941 of all the Imperial Japanese Navy’s bomber aircraft in service. It was revealed that the entirety of the Japanese bomber arsenal was incapable of striking targets in the United States from the Japanese airfields. The Mitsubishi G4M “Betty” was one of Japan’s newest aircraft being pushed into service. Despite its superior range of 3,749 mi (6,043 km) compared to previous IJN bombers, it still was not sufficient enough to strike the US mainland or targets deep in the Soviet Union. As a result of this, the Naval Kōkū Hombu (Aviation Bureau) issued the 16-shi specification in 1941 for a long range bomber. The 16-shi specification would call for a bomber capable of flying at least 361 mph (580 km/h) with a maximum range of 4,598 mi (7,340 km).

Interested in this specification, Mitsubishi’s staff began work on a design that would meet the criteria set by the Kōkū Hombu. Mitsubishi engineer Kiro Honjo (the designer of the G3M and G4M) proposed a four engine design, but this was promptly rejected by the Kōkū Hombu. As a result, another Mitsubishi engineer by the name of Kijiro Takahashi submitted his own design. Upon inspection by the Kōkū Hombu, Honjo’s design was approved and given the green light to proceed. Within Mitsubishi, the 16-shi design was known as the “M-60”. Takahashi’s design was to be powered by two “Nu” engines. The Nu was a 24 cylinder liquid cooled engine which was able to provide 2,200 hp at 16,404 ft (5,000 m) but, due to the start of Operation Barbarossa, Germany was unable to export machinery and tools needed to manufacture the Nu engine. Unfortunately for Takahashi, this turn of events would prevent his design from being completed. As a result of this, Takahashi fell out with the Kōkū Hombu and Kiro Honjo would take over the M-60 project. This time, Honjo followed the Kōkū Hombu’s suggestion and used two engines instead of his idea of four. Under Honjo’s lead, the Taizan’s power plant was changed to two 18 cylinder Mitsubishi Ha-42-11 engines capable of generating 2,000 hp each. It was also seen that Honjo’s design was less aerodynamic than Takahashi’s due to the weaker engines and heavier armament.

On October 31st of 1942, an evaluation was conducted on the work done so far, and a performance estimation gave the Taizan a range of 3,454 mi (5,559 km) and a speed of 332 mph (518 km/h) at 16,404 mi (5,000 m). Falling short of the original 16-shi specification, Mitsubishi scrambled to make adjustments but further revised estimates stated that the design didn’t see any improvements, and actually saw some deterioration. By the time the Taizan’s design was completed in late 1942 and ready for construction of a wooden mockup, a new 17-shi specification was released calling for a new bomber design. Kawanishi took up the design and created the K-100 bomber project. Seeing promise and a better alternative to the Taizan, the Kōkū Hombu ordered all work on the Taizan to be halted until the K-100 could be completed and evaluated. Kawanishi completed initial work on the K-100 and a comparison was made between K-100 and Taizan in the summer of 1943. The Taizan’s range differed significantly from the proposed normal range from 2,302 mi (3,705 km) to 1,726 mi (2,778 km). Due to the significant range reduction, the Kōkū Hombu stopped supporting the Taizan. With no more interest and reason to develop the Taizan, Mitsubishi would finally shelve the project and stop all work on it. 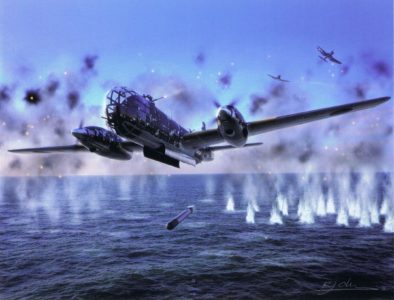 From an exterior aesthetic point of view, the Taizan bears a striking resemblance to the German Heinkel He 177. The nose of the Taizan was rounded and glazed over, a new design not in use by any Japanese bombers at the time. The wings of the Taizan were mounted mid fuselage, and were to be constructed out of metal. Fabrics, however, were to be used for the cover of the Taizan’s ailerons and rudder. 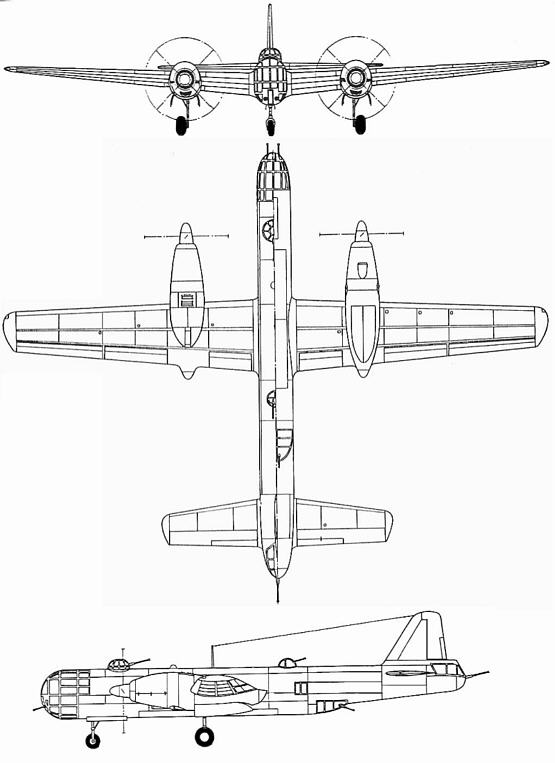 The Kawasaki Ki-88 was a fighter interceptor designed in 1942 with the intent of intercepting enemy aircraft heading towards vital military locations. The Ki-88 would never see service, as it was cancelled in 1943 after a mockup and partial prototype were constructed. Although considered by many to be the Japanese copy of the American Bell P-39 Airacobra due to the exterior aesthetic similarities, this is only speculation.

The origins of the Kawasaki Ki-88 began in August of 1942 when Tsuchii Takeo, a designer for Kawasaki, responded to a design specification put forward by the Imperial Japanese Army Air Service (IJAAS). The IJAAS determined that they needed an interceptor aircraft that would defend important military assets like airfields, gun emplacements, and others. The specification also stated that the aircraft had to be heavily armed, provide a stable gun platform and be easily flyable by new pilots.

Takeo began work on the Ki-88 and chose to use a 37mm Ho-203 cannon as the plane’s primary armament, with two 20mm Ho-5 cannons to complement the Ho-203. The placement of the guns prompted Takeo to place the engine behind the cockpit. Many sources state that this was done to copy the American Bell P-39 Airacobra, but that claim is debated. The P-39 Airacobra was in service at the time the Ki-88 was developed, but saw limited service with the United States. It did however, see service during the Battle of Guadalcanal. The Japanese were certainly aware of its existence and possibly captured an example of the P-39. If they did indeed capture an example, Takeo could have simply copied the gun and engine placement. It is important to note that such a “rear-engine” fighter configuration was a rarity in plane design at the time. Another common theory is that Takeo came to the same conclusion as H.M Poyer (designer of the P-39) did during the planning phase and designed the plane without copying the P-39. Other than the engine and gun placement, the two planes are quite dissimilar. 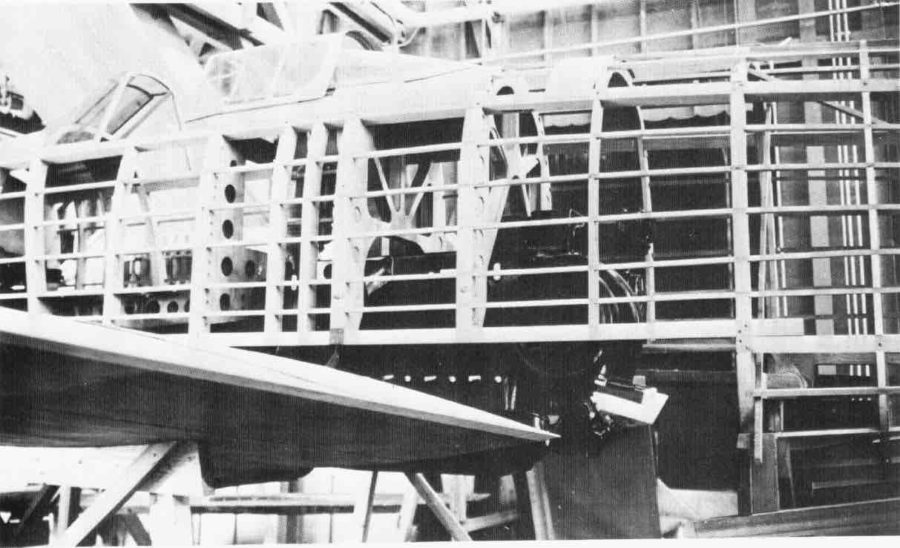 Takeo completed the Ki-88’s design in June of 1943. A full scale mockup and prototype were in the works in mid/late 1943, and estimated that the prototype would be completed in October of 1943. However, after the mockup and plans were inspected by representatives of the IJAAS, it was concluded that the Ki-88 had no real improvements over other designs of the time, and the top speed was only slightly better than the Kawasaki Ki-61 after calculations. The IJAAS immediately lost interest and ordered Kawasaki to cease all work on it.

The Ki-88 was a single seater, single engine fighter powered by a Kawasaki Ha-140 engine producing 1,500hp while driving a propeller using an extension shaft. The radiator was placed under the cockpit at the bottom of the fuselage. There was an air intake placed beneath the fuselage on the left to provide cooling for the supercharger in the Ha-140.

The Ki-88 used a conventional landing gear, in which the main wheels could be retracted into the wings while the tail wheel stayed fixed. There was a fuel tank in each of the wings, beside the landing gear wells.

The size of the Ho-203 canon prevented Takeo from placing the engine into the nose which led him to place it behind the pilot’s cockpit, much like the American P-39 Airacobra. Moving the engine to the back of the cockpit was a smart move, as it theoretically would have made the plane a more stable gun platform. Under the Ho 203, on both sides of the nose, there were two 20mm Ho-5 cannons.