The Meteor is an active radar guided beyond visual range (BVR) air to air missile produced by MBDA. It has entered service with the Swedish Air Force as of April 2016 on the JAS 39 Gripen. The notable feature of the Meteor is it’s ramjet technology, which enables the missile’s rocket motor to be throttle controlled, which combined with the missile’s advanced guidance make it extremely responsive to it’s target’s evasive maneuvers.

The Meteor was developed in response to several European nations’ need to begin considering the next generation of air to air missiles, with the ability to not only engage conventional manned airborne threats, but also unmanned vehicles and cruise missiles. The missile will be utilized by the air forces of the UK, Germany, Italy, France, Spain and Sweden. The Meteor will eventually by equipped by the Eurofighter Typhoon, the Dassault Rafale, the Saab Gripen, and eventually Britain’s F35 Joint Strike Fighters with the introduction of its Block 4 software.

The Meteor is being manufactured at MBDA’s facility in Lostock, Scotland.

The propulsion system, a ramjet, utilizes solid fuel with a variable ducted flow. The “no escape zone” is reportedly larger than any other air to air missile in production due to the missile’s ability to engage “maximum thrust” when in final pursuit of the target. The weapon’s electronics and propulsion control unit (ECPU) adjusts the cruise speed depending on launch conditions and the target’s altitude by controlling the ramjet’s intake ducts. The unit monitors the remaining fuel, maintaining ‘cruise’ mode whilst avoiding “full throttle” until the final stage of closing in. The ‘no escape zone’ is a cone shaped area calculated by the guidance software wherein the target will be unable to evade using it’s own maneuverability. As soon as the target is within the ’no escape zone’ the missile will usually accelerate to full throttle.

Externally, the Meteor has two square intake sections affixed to the aft of the length of the missile. The Meteor only has four rear fins for maneuverability but they enable it to perform bank to turn maneuvers. 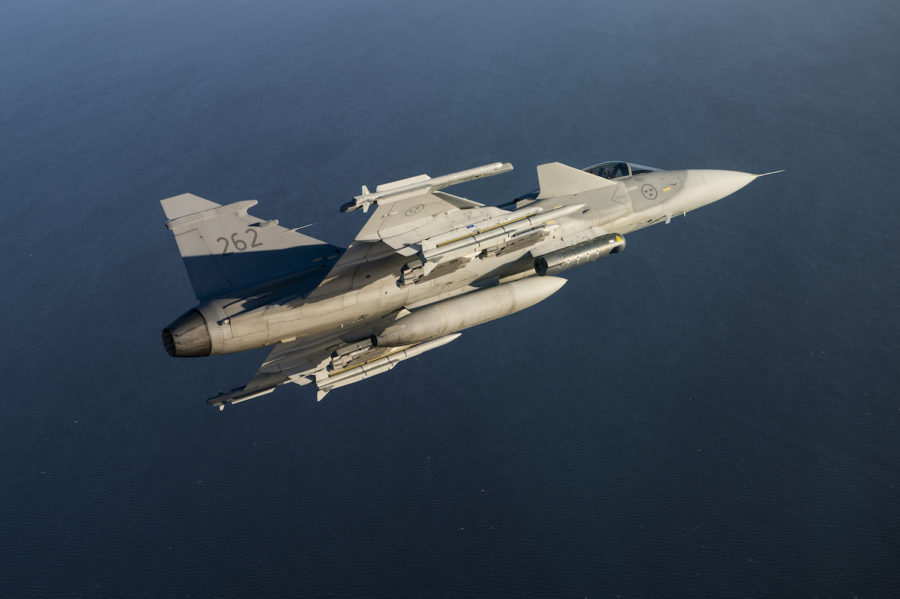 In addition to it’s active radar guidance seeker, which is shared with the MICA and ASTER series of missiles, the Meteor possesses two-way data link capabilities that allow it to continue communication with the targeting systems on the airframe it was fired from which itself may be receiving linked targeting information from other sources. This allows the weapon to more reliably pursue targets through cluttered countermeasure environment and report back it’s functional status. The guidance section also has its own IMS or inertial measurement system, enabling the missile to ‘dead reckon’ it’s location in the battle space relative to where it was launched from in it’s terminal phase.

The high explosive blast fragmentation warhead utilizes both impact and RF proximity fuzes which detonate to inflict ‘maximum lethality.’   It is capable of rail or ejection launching.

The maximum range of the missile is classified, but a report noted during a head on engagement test mentioned a distance “well in excess of 100 kilometers.”

The Meteor features an active radar guided seeker head which is capable of engaging in all weather.