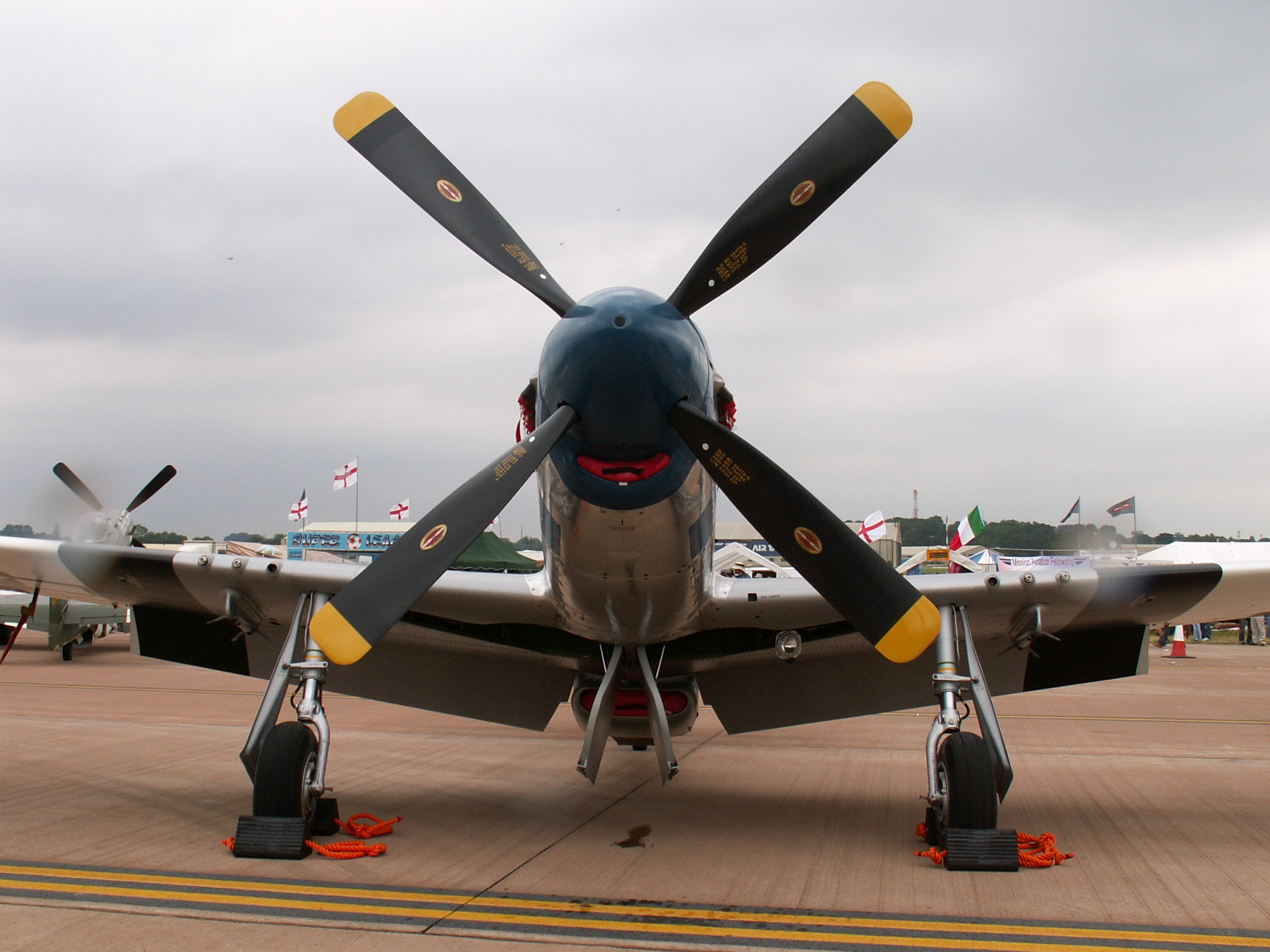 The P-51 Mustang is one of the most famous fighters of WWII and of all time thanks to its exceptional performance characteristics, strong airframe and the role this fighter plane played in the European Theatre against the German Luftwaffe. Contributing to its defeat and aiding the Allies in gaining full control of the skies. It was also a long-enduring aircraft, with the last ones retired in 1984. It was by far the best day and night-time fighter of the Allies’ arsenal, with the Lockheed P-38 being its closest in-service rival.

The Origins of the Mustang

The Mustang was a single-seat and single engine fighter/fighter-bomber for day and night-time, with low wings. Its development began after a 1940 request by the Royal Air Force (RAF) for further license-built Curtiss P-40 Fighters to the North American Aviation. The British realized that bombing missions over German occupied territories were risky, suffering heavy casualties at the hands of the highly skilled Luftwaffe pilots and their fighters. The company made a move that would have a ripple effect throughout history, as it proposed to develop a new fighter instead of issuing the RAF an old model that was in short supply. The P-40 chain of production was already overloaded, with the P-40 component manufacturers reportedly turning down requests.

As a result, in 1940 the development of the Mustang began, which was by itself a feat as it took only four months. Its first flight took place in October 1940. The plane was a very advanced aircraft for its time, as it had an entirely metallic airframe, while slightly bigger than the Luftwaffe’s Messerschmitt Bf-109. The P-51 featured laminar wings and a radiator located in the rear. It developed speeds of 615 km/h thanks to its Allison V-1710 engine, found in the early P-51 Mk I and P-51A Mk II. By 1942 it had joined the ranks of the RAF, with nearly 620 units issued, executing reconnaissance missions during the first landings the Allies attempted at the French port of Dieppe in August 1942, as well as ground-attack missions following poor high-altitude performance. The V-1710 tended to underperform at altitudes above 4500 meters.

As time went by, the Mustang would receive improvements that would enhance its already stellar performance. By late 1942 North American improved the propeller, the radiator and the aircraft’s aerodynamics. The developments in the engine design gave the Mustang increased horsepower and climbing ability, thus making the aircraft an exceptional air asset. The initial 12 cylinder Allison V-1710 engine was replaced with a Packard V-1650, which itself was based on the legendary Rolls Royce Merlin. As a result speed and range both were increased, with the top speed nudging up to 703 km/h and the range increasing up to 3703 km in the P-51B and C models. Furthermore, the upgrades were the key behind the Mustang’s celebrated reputation alongside its 6 12.7mm Browning machine guns. The Mustang reportedly shot down nearly 5000 enemy airplanes in air combat sorties, and destroyed nearly 4000 ground targets. Further improvements followed in the P-51D which had its airframe slightly shortened in the rear while received a revolutionary new bubble-shaped canopy. Additionally it had greater oil capacity and provisions for carrying rockets under the wings.

During the Sicily campaign the Mustang devastated the Luftwaffe and the Regia Aeronautica (Italian Air Force.) It also served as a notable escort fighter on bombing missions deep into Germany, wiping out the Luftwaffe’s defending fighters from the skies. It also had a very limited participation in the Pacific during WWII, seeing more action during the Korea War with the US Air Force, the Republic of Korea Air Force, the Royal Australian Air Force, and the South African Air Force, until all of the aforementioned replaced the Mustang with newer platforms. During the Korean conflict Mustangs were used for ground-attack and reconnaissance missions sustaining heavy losses due to ground fire. It was then in service with reserve units until 1956, except for three F-51Ds. The nomenclature for US fighters was changed from P for ‘Pursuit’ for F for ‘Fighter’ after WWII. These F-51s were used as chase planes for the Lockheed YAH-56 Cheyenne attack helicopter project and other experimental purposes until the late 60s.

The Mustang also saw extensive use in combat with other air forces. The Netherlands used them during the Indonesian War of Independence. Israel deployed the Mustang during its War of Independence and the Suez Canal Crisis also known as Operation Kadesh. The Philippines used the Mustangs for counter-insurgency purposes during the Huk campaign against communist guerrillas. Indonesia and many South American countries used the P51 in many similar campaigns against guerrilla fighters. Sweden used the Mustangs on reconnaissance versions for Operation Falun, a reconnaissance of soviet Baltic coast military installations in 1946-47; El Salvador’s Air force also made use of this model during the 1969 Soccer War against Honduras, being the last combat use between piston engine fighters (with Honduras using the Vought Chance F4U-5); and the Dominican Republic, were they took part in Operation Power Pack, an US intervention during the brief 1965 Dominican Republic Civil War. This was the last air force in withdrawing the Mustang from active duty in 1984.

The Mustang also had a civilian life after WWII and other conflicts it served. Many are now privately owned with some now in museums and on static display. Others are still airworthy and maintained by hobbyists and historical societies. Some have even been modified for racing.  A total of 15.386 Mustangs were built.

The Mustang is a low-wing fighter, with a single tail and a single engine: 1 Allison V-1710 V-12 developing 1,325 hp used in the P-51 Mk.I and P-51A Mk.II or 1 Packard V-1650 V-12 of 1,315 hp in the P-51D and onwards. Its wings featured a laminar flow airfoils that generated very low drag at high speed, also providing outstanding aerodynamic characteristics. The radiator is a remarkable feature of the Mustang, in both its shape and performance as it takes advantage of the ‘Meredith effect’ which creates a slight jet thrust from the heated air flowing outward providing more propulsion to the engine and increasing the speed of the aircraft. A 2 stage supercharger gave the Mustang power enough to outperform its German counterparts. This designs also had incidence with the length of the aircraft, which allowing the fitting of a bigger inner fuel oil tank that increased its maximum range and speed. The fuselage shares the same features as the Lansen, which was lofted mathematically using conic sections. This resulted in a smooth fuselage with low drag surfaces. The Mustang had another unique feature: its fuselage was divided into 5 sections – forward, center, rear fuselage, and two wing halves which made assembly during production very efficient.

The aircraft material was covered in aluminum overall, which made the Mustang a lightweight aircraft for its day. Combined with its aerodynamic characteristics, it was an aircraft easy to fly with good performance in-flight and during combat.

The first versions of the Mustang (P-51 to P-51C) had conventional canopy setup with the door opening and closing upwards and downwards to the side albeit possessing poor rearward visibility. The P-51D and the following versions introduced the bubble-shaped canopy that is widely known which gave the pilot a full 360° view. This design slid on rails that moved backwards, making easy entry and exit. This would influence the design of future fighters and light bombers canopies alongside its bullet-proof windscreen.

The Mustang would go on to win the skies and the hearts of the bombers crews, as it provided good escort to the very risky and dangerous long-range bombings deep into German territory. Needless to say, it also won the respect and fear of its adversaries. The crew of the bombers dubbed the Mustangs as “little friends” for the invaluable protection they afforded to the bombers during the deep raid missions over German-controlled skies.

The P-51 Mustang came about initially by request from the RAF to be provided with a fighter capable enough to match the German Messerschmitt, but it had the P-40 in mind. North American, the manufacturing company, proposed instead a new airplane. When it came in service with the RAF, it became the first fighter capable of penetrating deep into the German skies from England. As a result, the US decided to operate it over the skies of Italy and Sicily. Evaluating the performance and range, the P-51 was then used as bomber escort plane, being capable of reaching even Poland and Czech Republic. When executing this particular task, it became an important air asset for the Allies to control the skies of Europe. But it was not mere realization about such need what brought the P-51 into the scene. In fact, there were two factors that pushed the Allies into adopting the Mustang as escort airplane: First, the initially reluctant allies were able to assess the potential the Mustang had once the D type was introduced with all of its improvements. Second, two disastrous raids over the German city of Schweinfurt, where the bombers suffered heavy casualties at 59 destroyed, morale was low. The resulting evaluation showcased the need for bombers to be provided with escort fighters to carry out strategic bombing operations with minimal losses.

The Mustang also executed the similar escort missions in the Pacific theatre alongside the Boeing B-29 Superfortress bombers over Japan. Once the island of Iwo Jima was taken by the Marines, the Americans had a base from which both bombers and escort fighters could strike mainland Japan.