The Ta-Gō was an attempt at creating an easily made and cheap kamikaze aircraft in anticipation of Operation Downfall and Operation Olympic. The plane would have been used by special “shinpū” (kamikaze) units to ram advancing Allied tanks, infantry and boats. Fortunately for the Allies, the Ta-Gō project was cancelled once the Empire of Japan capitulated.

The concept of the Ta-Gō came in late 1944, when Japan was on its heels after losing the majority of its territories to the Allies. With the recent loss of Guam, Okinawa, Iwo Jima, and other islands, Japan was convinced that the American invasion of the Japanese mainland was inevitable. By 1945, Japanese factories and industries suffered from constant bombings by the USAAF. This led to the deprivation of much needed materials to produce planes and tanks. Because of this, much of the already existing aircrafts were designed to be built with wood. (Example: Ki-106 from Ki-84, D3Y from D3A). Even then, Japan’s industry could barely produce such planes due to the situation of the war.

Watching his country’s resources slowly depleting and the rapid advance of the Allies, IJA Captain Yoshiyuka Mizuyama wanted to make a difference. He wanted to design a simple, cheap and easily producible plane requiring minimum materials for designated kamikaze units. If the Ta-Gō was mass produced, it could easily fill already depleted kamikaze units, and would make kamikaze attacks more popular. Once Mizuyama finished designing the plane, he went to Tachikawa Hikōki Kabushiki Kaisha (Tachikawa Aircraft Company) and submitted his design. His design was however rejected because Tachikawa Hikōki simply could not afford to allocate resources for the Ta-Gō. It was also rejected due to the fact that Mizuyama’s design was not officially approved by the state.

Determined to initiate his project, Mizuyama looked around the city of Tachikawa until he discovered a small woodwork shop. He rented the shop and began constructing his first prototype with the help of his men. Around February of 1945, Tachikawa was firebombed by the USAAF. The workshop was completely destroyed along with the sole prototype. Still determined to initiate the project despite the major setback, Mizuyama approached Nippon Kokusai Kogyo K.K (Japanese International Aviation Industries Ltd) to continue his project. Luckily for him, Kokusai accepted his project. Since Kokousai accepted the project, they asked that Mizuyama redesign certain parts of the plane to so that it would require even less materials and manpower. The Kokusai design’s dimensions was significantly scaled down compared to Mizuyama’s original design and was simpler altogether. 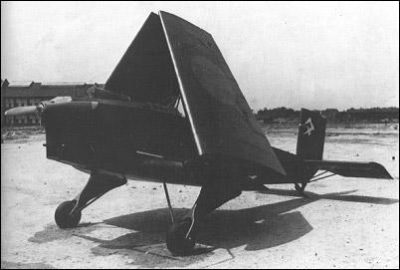 Now satisfied that his work was accepted, he began building the new model of the Ta-Gō with help from Kokusai. The prototype was completed around the middle of June, and was test flown for the first time on June 25th, 1945 with an experienced pilot from Kokusai in the cockpit. The test pilot expressed obvious handling concerns and gave helpful tips to the designers. As a result, the Ta-Gō participated in more test flights and was modified on the drawing board. In the end, the blueprints for the production variant were finalized. Unfortunately for Mizuyama and Kokusai, the Empire of Japan surrendered to the Allies in August of 1945, and the Ta-Gō never entered production. Interestingly enough, the Allies discovered two variants for the Ta-Gō named “Gi-Gō” and “Tsu-Gō” after Kokusai surrendered all their documents. However, there is no known information on them today.

Tachikawa, funnily enough, took on the project too after the Kokusai prototype was completed and authorized by the Gunjushō (Ministry of Munitions) despite them rejecting the project earlier. Once the American Occupation forces arrived in Japan, they found the Tachikawa Ta-Gō incomplete. Once the Ta-Gō was accepted, it was given the designation Ki-128. It is not confirmed whether the designation was for the Kokusai or Tachikawa variant or both.

The Ta-Gō was a single seated kamikaze plane made mostly out of plywood, fabric, and wood lathes. The original Ta-Gō design used wood lathes for the fuselage and structure, and used plywood and fabric for the outer skin and control surfaces. The pilot’s compartment featured a simple acrylic glass. The landing gear was fixed, meaning they couldn’t be retracted. It featured a Hitachi Ha-13 Ko 9-cylinder radial engine that produced 450hp, with thin steel sheets as the engine cowling. The only armament it could carry was a 500kg bomb, which cannot be released. Other than these details, little is known about the original Ta-Gō as hardly any evidence exists.

The refined design for Kokusai made the Ta-Gō much smaller than its original size. Due to this, the plane could no longer house the Hitachi Ha-13 Ko, and was replaced by the Hitachi Ha-47 11 producing 110hp instead. Because of the severe engine power decrease, the 500kg bomb load had to be changed to 100kg. Another change from the original design was the cockpit was open topped. The only thing that covers the pilot is a simple acrylic glass pane that shields from the wind. As for the engine, it was protected by an angular wooden cowling. The engine was paired with a two-blade fixed pitch wooden propeller. The engine mount was made of metal, with the fuel tank placed on top of the engine, thus using a gravity feed system. In between the acrylic glass pane and the fuel tank, there was an oil cooler. As for cockpit instruments, only the very basic and important ones were kept. Such instruments used were a compass, speedometer, altimeter, and engine-related gauges such as fuel and oil. The fuselage was also boxier than the original design. This design feature was extremely simple to manufacture, but was very un-aerodynamic. 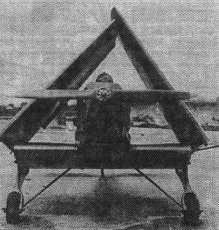 The fuselage and structure was made with wooden spars and plywood, much like the original Ta-Gō. The wings were rectangular shaped, and were hinged near the landing gear, which allowed the the wings to fold upwards. The reason why the wings could be folded was because the Ta-Gō was suppose to be hidden in caves and take up less space in the factory line. The rudder and elevator of the Ta-Gō were both rectangular shaped. As for the landing gear, it was made out of steel tubing and paired with rubber wheels. Each landing gear was supported by a metal strut. 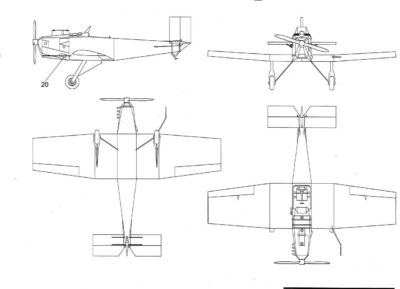