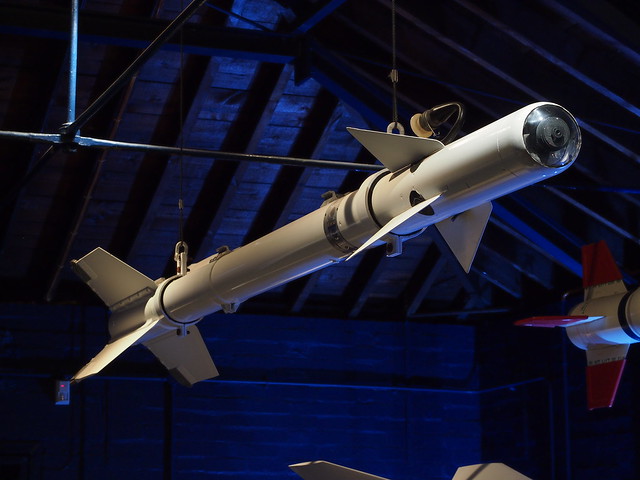 The Sidewinder is a supersonic, heat seeking, air to air missile for use by fighter aircraft. The missile was originally developed for the U.S. Navy for fleet defense, but was subsequently adapted for wider usage by the U.S. Air Force. The AIM-9 achieved the first successful combat use of a guided air to air missile. It has become the most used missile by Western air forces, with it’s low cost and reliable track record. Its code word is “FOX-2,” which refers to the launch of an infrared guided missile. The Sidewinder is estimated to have 270 aircraft kills. An example of the current unit cost of one Sidewinder is $603,817 for one AIM-9X Block II (2015).

The AIM-9 Sidewinder is the world’s most successful short-range air-to-air missile, and will remain the U.S. military’s main “dogfight” AAM until at least 2055.

In the 1950s the United States Navy went about developing a short range air to air missile that could be used during combat. The missile was originally developed by the United States Navy at Naval Air Weapons Station China Lake, California. William B. McLean were experimenting with proximity fuzes sensitive to infrared heat. Being involved in R&D, it was not officially sanctioned for their office to develop weapons. As such their ‘intelligent’ fuze was kept under wraps and developed by volunteers using spare parts for several years, with the ultimate goal of building a heat seeking air to air missile. The final design featured a gyroscopic mirror spinning at around 4,000 RPMs behind a glass cover on the front of the missile. It utilized a lead-sulfide detector as it’s ‘eye’ which kept the assembly focused on the infrared source of the target. Issues with roll and target tracking were overcome with the invention of ‘rollerons’ which were wheels mounted to the tail fins of the missile to stabilize it in flight. The guidance section utilized circuits comprised of 14 tubes and 24 moving parts, a remarkable achievement in the 1950s.

After it became clear that its new technologies offered superior performance over the USAF’s own AIM-4 Falcon, the Air Force began using the Sidewinder on most of its combat aircraft.

The first kill from a Sidewinder missile was on September 24th 1958, when F86 Sabers belonging to The Republic of China Air Force (ROCAF) ambushed a flight of MiGs belonging to the People’s Republic of  China (PLAAF) during the Second Taiwan Strait Crisis .

During this conflict, one AIM-9B struck one of the PLAAFs MiG-17s without detonating, enabling the pilot to safely bring the aircraft back to base. The Soviets used this to reverse engineer their own copy of the Sidewinder, dubbed the Vympel K-13 or AA-2 Atoll (NATO). 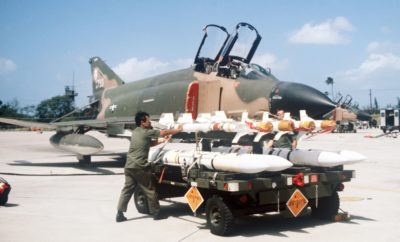 AIM-9s were used extensively in Vietnam by the USAF and the US Navy. The two services combined scored 82 air to air victories out of 452 Sidewinders fired, resulting in a kill probability of 18%. Sidewinders of this period often flew up into the exhaust of their targets before detonating just aft of the wing.

Today though various upgrades and variants the AIM-9 is being used by most Western countries, with many more equipped with the Soviet copied K-13.

The missile’s primary components consist of an infrared guidance section with active optical target detection, a high explosive warhead, and rocket motor. The principles of the infrared guidance allow it to ‘home in’ on a target aircraft’s exhaust heat signature. The missile’s seeker must be cooled to extremely low temperatures to achieve effective operation. This operation makes the missile a ‘fire and forget,’ and relatively immune to electronic countermeasures.

Early versions of the missile had to be fired at the rear of the target to maintain an effective lock. The seventies saw the introduction of the AIM-9L which was capable of “all aspect” usage, meaning it could be fired at a target from all directions. This even meant that a target could be engaged head-on, a factor that has since significantly impacted aerial combat doctrines.

The Sidewinder is also capable of being equipped to rotary wing aircraft, such as the AH-1 SuperCobra. AIM-9Xs have also been successfully tested against ground targets and have proven useful against light ground targets. 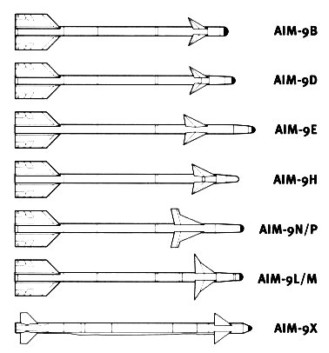