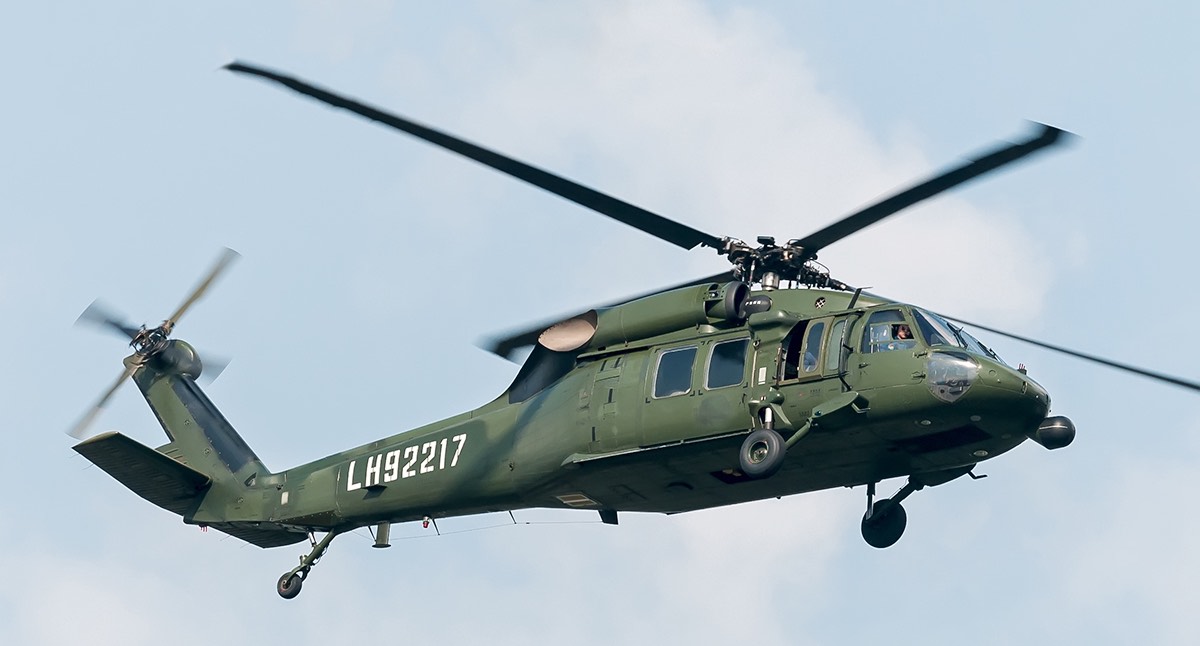 The Sikorsky Black Hawk family is one of the most well-known helicopters of recent history. In its dozens of guises, it serves over 20 militaries worldwide. One of the lesser known operators is the People’s Republic of China. Initially purchased to be operated in the mountainous terrain of Tibet and Xinjiang, the Black Hawk eventually found itself as an aid relief helicopter in the 2008 and 2013 earthquakes in Sichuan and an inspiration for the design of the Harbin Z-20 helicopter.

The harsh geographic characteristics of Tibet and Xinjiang undoubtedly presented many tough problems to the People’s Liberation Army (PLA). The extreme altitudes of the Tibetan and Xinjiang plateaus make the duties of border troop outposts quite difficult, with Tibet being especially problematic. The Tibetan border alone spans nearly 3,728 mi / 6,000 km, with guard posts on mountains reaching over 13,123 ft / 4,000 m. The highest guardpost is the Shenxianwan (神仙湾) post at 17,650 ft / 5,380 m altitude. At these extreme altitudes the temperature is quite low with snow covering the mountains all year around, and the air is also oxygen deficient. All these factors combined make patrols and resupplying quite difficult for the border troops. Helicopters are the only viable option for resupplying missions as there are nearly no airstrips or adequate roads. The oxygen scarcity prevents helicopter engines from working to their full capacity, as well as reducing the rotor efficiency. This means that flying a helicopter up to that altitude is risky and difficult. Even if the helicopter can safely arrive, the amount of supplies that can be transported is severely limited and it would require several trips to fully resupply a base. In order to find a solution for this problem, China began to look into the international market for a high performing utility helicopter capable of operating at high altitudes and replacing the aging Soviet Mi-8 they were using for transport duties. Adopting the principle of “comparing three products and buying the best” (货比三家，择优选购), China chose three models of helicopters from various Western companies to compete for their business. The American Bell 214ST, Sikorsky S-70 Black Hawk and French AS332 Eurocopter were chosen as potential candidates and examples of these helicopters were promptly sent to Lhasa for flight trials in December of 1983. The flight tests were conducted on an airfield at an altitude of approximately 5,600 ft / 1,600 m and had all three helicopters fly to higher mountains. Upon reaching approximately 9,840 ft / 3,000 m, it was discovered that the power of all these helicopters dropped noticeably and the engines were not able to deliver sufficient amounts of thrust and the helicopters were unable to successfully complete the test flight. After three months of research, Sikorsky’s technicians were able to successfully address most of the issues and flight tests for the Black Hawk were continued. The improved Black Hawk was able to fly over the Tanggula Mountains at an altitude of over 17,060 ft / 5,200 m and land in the nearby Ali region. After numerous thorough examinations, the Black Hawk was ultimately crowned as champion and determined to be best suited for the Tibetan and Xinjiang environment. In July of 1984, the Chinese government officially placed an order for 24 unarmed S-70C-2 Black Hawk models, which would be specially built for China. They featured high performing General Electric T700-701A engines for high altitude flights and a nose-mounted weather radar. The first batch of Blackhawks would arrive in November of the same year, designated as civilian helicopters. The transaction cost China an approximated total of 140 million USD. Despite officially being classified as civilian helicopters, the S-70C-2 was used in a military capacity during their service with the People’s Republic of China. Initially assigned to the People’s Liberation Army Air Force (PLAAF) in 1986, the Blackhawks were later reallocated to the PLA’s air branch. In Chinese service, the Black Hawk would mostly be assigned to the Tibetan plateaus, where they resupplied and transported border troops. During the 1987 border skirmish with India, the Blackhawks were extensively used for tactical troop transport and supply runs in the Indo-Tibetan border region. The S-70C-2 was able to carry up to 8000 lbs / 3630 kg of equipment, 12 or 14 people in normal situations , and up to 19 people in emergency situations. Unfortunately for the Chinese, support and spare parts from Sikorsky would come to an abrupt end after the 1989 Tiananmen Square massacre. The result of this massacre greatly impacted Sino-American relations and future sales of military hardware were prohibited. It seems that Sikorsky made an attempt to reestablish relations with the Chinese in 1998 by asking the government to allow the sale of replacement engines and parts to the Chinese, arguing that the parts should no longer be considered military hardware. This request, if ever made, was rejected. It would appear that only 21 of the 24 Blackhawks purchased were in service after 2000. Three Blackhawks were supposedly written off during service, probably due to piloting error or equipment malfunctions. Numerous Blackhawks were deployed during the 2008 and 2013 earthquakes in Sichuan, China to administer aid relief, alongside numerous Soviet-era helicopters such as the Mi-8. The Blackhawks are still in service with the Chinese to this day, but will most likely be replaced by the Harbin Z-20.

When taking in account of China’s long history of reverse engineering or copying technology from other countries, it should be no surprise that the Harbin Aircraft Manufacturing Company’s (HAMC) latest Z-20 (直-20, or Zhi-20) helicopter bears a striking resemblance to the Blackhawks. Believed to have been in development since 2006, the Z-20 finally took to the skies on December 23rd of 2013. Contemporary sources seem to suggest that the Z-20 possesses superior characteristics to the Black Hawk due to the refined design, but this has yet to be confirmed. As the Z-20 has only recently entered service and is still kept in relative secrecy. One can only speculate about its capabilities.