The Beechcraft XA-38 Grizzly was an experimental attack aircraft stemming from a USAAF requirement for a two seated attack bomber. Two prototypes were constructed between 1944 and 1945, and saw extensive testing within the US. The Grizzly showed promising performance, but was ultimately cancelled due to the engines intended for use was given priority to the Boeing B-29 Superfortress and the inevitable victory of the Allies.

In 1942, the United States Army Air Force (USAAF) issued a requirement for a two seater attack bomber. Beechcraft was quick to respond, and proposed their design to the USAAF. The USAAF was very interested in the design, and ordered two prototypes to be constructed in December of the same year after granting the contract to Beechcraft. In anticipation of the two prototypes, the USAAF assigned serial numbers to them, being “43-14406” and “43-14407”.

Beechcraft specifically designed the Model 28 to be able to destroy gun emplacements, ships, armored vehicles and bunkers while keeping great maneuverability and able to remain airborne after being damaged. All of this would be done by the addition of a powerful 75mm T15E1. The task of developing the Grizzly was given to a team led by Bill Cassidy with Jess Vint and Alex Odevseff in charge of designing the armaments, Bill Irig in charge of the control surfaces, Gus Ericson in charge of the design of wings, Mervin Meyers in charge of hydraulics, Ralph Harmon in charge of the landing gear structure and Noel Naidenoff in charge of the engine compartment. The Grizzly is common thought to be a modified Model 18 design, but this is untrue. The Grizzly did take inspirations from the Model 18, though.

The first Grizzly (43-14406) was delivered to the Army Air Force and flown on May 7th of 1944 by test pilot Vern L. Carstens. The first test flight went relatively well except for an unplanned touch-and-go during landing. This was due to Carsten’s inexperience with landing such a large plane. The first prototype had no armaments installed, but had a wooden mockup of the 75mm T15E1 cannon. In the next few test flights, the Grizzly proved itself to be very aerodynamically stable, and made a good impression with the designers. A memorable flight test includes a performance comparison between the Grizzly and a recently manufactured North American P-51B. The Grizzly and P-51B were put in a mock pursuit, and the P-51B was reported to have been unable to keep up. Afterwards on July 7th of 1945, the first Grizzly was transferred to Wright Field to be used by the USAAF. It then participated in 38 test flights from between October 13 and October 24 of 1944 flown by Captain Jack W. Williams. Williams affectionately noted that the Grizzly was a great aircraft and “very maneuverable” for an aircraft of its size. It is also interesting to note that the turrets on the first Grizzly were dummies.

The second Grizzly (43-14407) had its maiden flight on September 22nd of 1945, once again piloted by Carstens. The second prototype was intended for armament testing, so it had all weapons fitted. The 75mm T15E1 prototype cannon was already successfully tested the year before on July 1st. The second Grizzly flew a total of 38 hours afterwards in tests at Eglin Field in Florida.

As successful as the Grizzly was, it would never reach mass production status because of two reasons. The first reason was that the R-3350 engines were in short supply, as the Boeing B-29 Superfortress had top priority for the engines. Second, the war situation was already in America’s favor, thus cancelling out the need for such an aircraft. As a result, both of the Grizzlies were retired from active service. One was scrapped while the other one was transferred to the Davis-Monthan Airfield in Arizona, meeting an unknown fate. 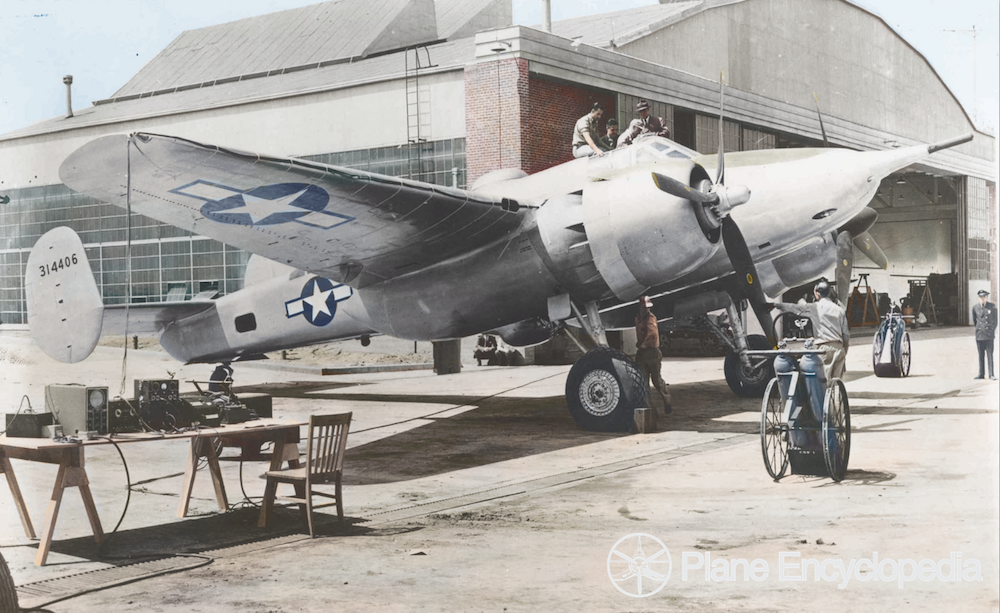 The XA-38 Grizzly was an all metal, two seat, twin engined semi-monocoque plane with cantilever wings, conventional landing gears, oleo-pneumatic shock absorbers and hydraulic brakes. It was powered by two Wright R-3350-43 Duplex Cyclone engines, the same engine that powered the Boeing B-29 Superfortress. The propellers measured at 4.32m (170in) each in diameter.

The plane used flush riveting and butted skin joints to give the plane its pristine, shiny look. The foil used to construct the wings were derived from the NACA 23000 series which was good for high and low speeds. The engine hub was made from stainless steel and aluminum alloy. The oil coolers were placed in the wings. Four fuel tanks were installed in the wings with a capacity of 2,422 litres (640 US Gallons). Two self-sealing fuel tanks were also placed behind the cockpit which can carry 681 litres (185 US Gallons) if needed to. There were pumps and connectors installed onto the tanks, which would stop fuel flow if the tanks took damage.

As for armaments, the XA-38’s 75mm T15E1 was the defining feature. Could carry 20 rounds fed by a Type T-13 feeding system. There would be a Type N-6 reflector sight to help the pilot aim. The cannon would fire every 1.2 seconds if the pilot pressed the trigger button. Two .50cal (12.7mm) M2 Browning machine guns were installed under the cannon with 500 rounds each. The entire nose section of the XA-38 could be unhinged, where mechanics can easily access the guns for maintenance. 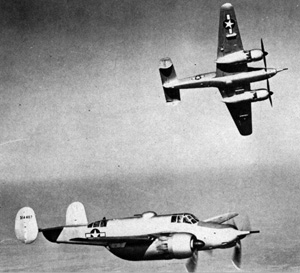 The Grizzly had two turrets, one located on the top of the fuselage and one on the bottom. The turrets were manufactured by General Electric and had two M2 Brownings each with 500 rounds. These two turrets were controlled by a single gunner seated in the rear fuselage. He would aim the guns with a periscope to control the turrets. Interestingly enough, the turrets can also be fixed to fire forward to accompany the T15E1. Ordinance wise, the XA-38 was designed to carry a wide range of things. It could have carried bombs, napalm, torpedoes, fuel tanks, smoke tanks and depth charges.