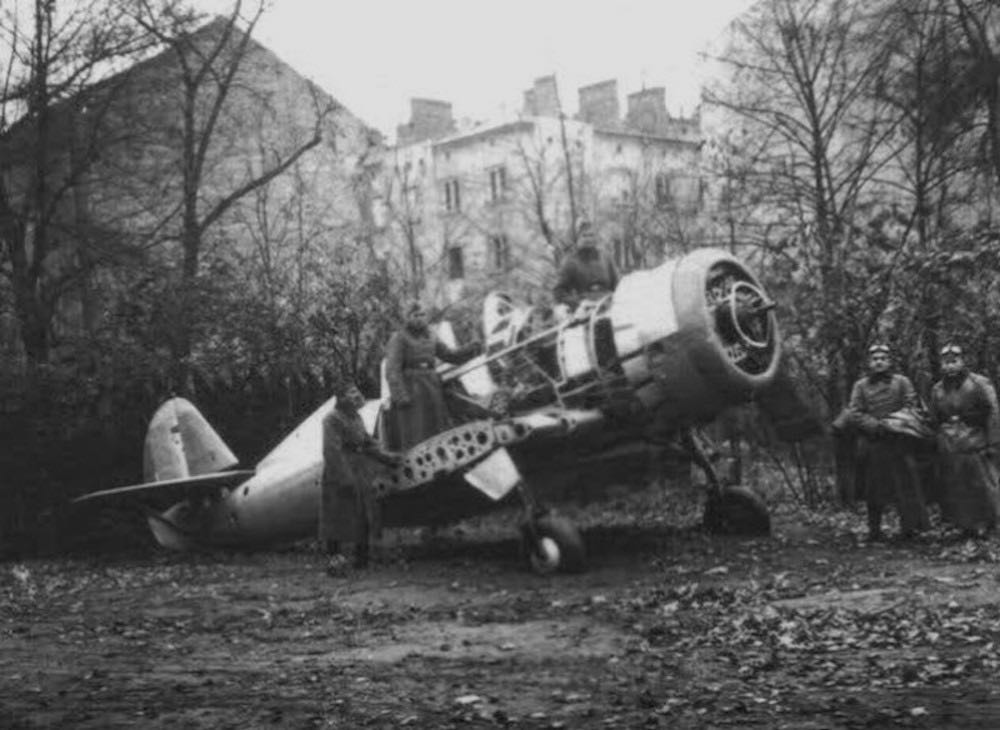 The PZL P.50 Jastrząb (Hawk) entered development in 1937 as a replacement for the outdated PZL P.11 and PZL P.24 fighters. Very little was known about the aircraft until relatively recently, with only a few photographs and documents about this aircraft surviving World War II. Most of what is known at the time of writing is based on accounts and sketches from PZL engineers years after the war and mostly based on memory, which is not the most reliable form of historiographic evidence. Ultimately, the project was cancelled in March of 1939 due to dissatisfaction with its underpowered radial engine, despite an attempt being made to fit an inline vee engine to the aircraft in the form of the PZL P.56 Kania (Kite).

In the latter half of 1936, plans to replace all of Poland’s PZL P.11 single-engine fighters with the twin-engined PZL P.39 heavy fighter were abandoned, and the need for a maneuverable single-engine interceptor was recognized. Briefly, the PZL P.24 was considered in order to fulfill this role, but as it did not offer much of an improvement over the P.11, it was ultimately decided that an entirely new design was needed.

Wsiewlod Jakimiuk, the head of PZL’s fighter team, submitted a proposal in autumn 1936 featuring “an advanced low-wing monoplane which offered improved all-around performance and great scope for future development” (Cynk, p. 259). The aircraft resembled the American Seversky/Republic fighter designs. One of the things that Jakimiuk focused on in the design of this aircraft was to allow upgrading to larger and more powerful engines to be a simple task to accomplish at any later time.

Ultimately, after a heavily-protracted design process plagued by numerous issues, the aircraft never saw combat and only 32 airframes had been built before Poland was invaded by Germany and the USSR in September 1939, but 30 of these were not completed.

In the fall of 1937, the design, now called the PZL P.50 Jastrząb and powered by a British 840-horsepower Bristol Mercury VIII radial engine, was approved and two prototypes were soon built. The first prototype, called the P.50/I, was designed to take engines up to 1,200-horsepower while the second prototype, the P.50/II, was designed for engines of up to 1,600-horsepower. Both versions were to be armed with four 7.7-millimeter machine-guns in the wings although, confusingly, the few images of the P.50/I show two of these guns in the forward fuselage instead. The P.50A production version of the P.50/I was envisioned to have a top speed of 310 miles per hour (500 kilometers per hour) at 14,100 feet (4,300 meters).

The Polish Aviation Command almost immediately ordered 300 aircraft and paid for the first 100 in advance, with the first 50 expected to be delivered by September 1939. In order to speed up development The Dowty Company of Britain was contracted to build the landing gear for the prototype, while PZL and the Czech Avia company would design the production aircraft’s landing gear. Dowty delivered the landing gear over four months late, and the P.50/I Jastrząb prototype, still utilizing the Mercury engine, did not even fly until February 1939.

During the P.50/I’s initial flight trials, it was discovered that the desired performance parameters were far out of reach. The top speed at full load was only 274 mph (442 kph). It also handled low-speed turns very poorly and had a tendency to wobble at top speed. Curiously, it was discovered that the engine was unable to produce full power under any circumstances. It was not until May that it was realized that the carburettor air intake was too small. After enlarging the intake and improving the tail and wing surfaces, the aircraft’s performance was improved. In August, the aircraft finally reached its desired speed but, by the time the war began in September, the aircraft was still a long way from being ready for service. The only known photos of the P.50/I come from a visit in February 1939 by the Italian Foreign Minister, Count Galeazzo Ciano.

Developed alongside the P.50/I was the P.50/II, which had been completed in the spring of 1939 and was still waiting for an engine by the time of the invasion in September. The P.50/II differed greatly from the P.50/I, so much so that it is believed to have received a new designation just before the war began. The canopy was an all-round-vision hood, somewhat similar to the Soviet Yak-1b. The P.50/II also included provision for additional fuel tanks and a 660-pound (300kg) bomb, and two 20mm cannons were added to the wings. The two machine-guns which were in the fuselage of the P.50/I were also moved to the wings. The powerplant was supposed to be the PZL Waran radial engine, capable of up to 1,400hp, with the intended top speed of the P.50/II being 350mph (560kph). However, development of the engine was far behind schedule and it was estimated that it would not be ready before the middle of 1940. In a desperate search for a suitable engine, several different options were considered. These included the 1,375hp Bristol Hercules and the 1,400hp Gnome-Rhone 14N, again both radial engines. In the end, the Hercules appears to have been chosen, and it was around this time that the P.50/II received its new designation.

There was one more derivative of the P.50, beginning in late 1938. Political upheaval was ongoing in the Polish Air Force high command, and General Ludomil Rayski, who favored radial engines, was coming under heavy criticism and was nearing replacement by General Jozef Zajac, who favored vee engines. This replacement would eventually take place in March 1939. Jakimiuk, the designer of the P.50, anticipated this shift and proposed a Jastrząb adapted to take an inline engine. The aircraft was given the designation P.56 Kania (Kite) and was to be powered by the 1,200hp Hispano-Suiza 12Y, and later by the improved 1,600hp Hispano-Suiza 12Z. However, another PZL designer, Jerzy Dabrowski, submitted a competing design bearing the designation P.62, and this design was preferred over the P.56. The P.56 was ultimately cancelled in the summer of 1939.

When General Rayski was ousted from the command of the Polish Air Force in March 1939, the P.50/I was still having severe problems. His replacement, General Zajac, canceled all production of the P.50 almost immediately. 30 P.50A airframes had begun construction at the W.P.1 plant in Okecie and, after the P.50/I began to show improvement, construction was permitted to continue on these aircraft only. Because of the unsatisfactory results of the Mercury engine, plans were made to power the very first of these production aircraft with the 870hp Gnome-Rhone 14Kirs, and this aircraft was very close to being ready in September 1939. This was to be a sort of test aircraft for an improved version of the P.50A, the P.50B Jastrząb B. There were also plans to mount the 1,100hp Gnome-Rhone 14K or the 1,000hp Pratt & Whitney R-1830 Twin Wasp, although these never came to fruition.

“The Hawk Which Would Never Prey”

On September 5th, 1939, the PZL factory in Warsaw was evacuated. Test pilot Jerzy Widawski attempted to escape with the P.50/I prototype, but was accidentally shot down by Polish anti-aircraft guns. Five pre-production P.50A airframes and the P.50/II prototype, including the aircraft intended to be equipped with the 870hp engine mentioned earlier, were moved out of the Okecie plant on September 3rd. These were captured by the Germans and scrapped in 1940, bringing a final end to the P.50 Jastrząb project.

Video made by the author specifically to accompany this article.

One thought on “PZL P.50 Jastrząb”